So which tsundere you picked? The Black Cat or the mighty Railgun?

Yes! Misaka Mikoto won Goko Ruri to proceed on to the Finals for the second time just like her J.C Staff counterpart earlier on. This will also mean a J.C Staff Grand Finals as people have been talking about, it is about the 2 best girls J.C Staff had to offer fighting for the coveted crown. Was surprised at the 2300 VD as I thought the match will be much closer then than this. Guess either Kanade supporters decided not to vote or did not rally as well as I thought. I also thought HanaKana voters will vote all for Ruri but she was not even able to get near Kanade level support this time. Congrats to her though for making it this far by defeating Yuki which was quite an upset. Of course our Railgun deserve to be commended to make it to the Finals again and hopefully she will be able to do what she failed last year, to get the tiara this time for good. Unlike last year, her opponent this time can be said is on a more balanced level as her hence giving a chance that the match will swing either way. Shana can’t be underestimated at all despite Mikoto defeating her 3 times as her strength is growing faster then ever especially evident from her stunning upset dished out to Kanade. Nevertheless I am rooting all for Mikoto and I hope my readers will too. I really wish she will win ISML at least once especially after missing out on AST Elite Eight twice in a row, giving her a moe resume to boast of in later years! Go Mikoto!!!!!!!!

~Representing K-On! and Hayate No Gotoku!~

Well Azusa continues her dominance over her opponents. She may be out of contention for the Tiara but she continues to win over all of her opponents. K-On!’s pride if you ask me after Mio seem to be losing strength so much in post season.

Wow what another upset. Yuki lost for the second straight time to a lower seed opponent. It is either she is losing strength or Taiga gaining strength and seeing the results of both including their previous matches I would say it’s both. Looks like Yuki can’t keep up her strength from regular season after all.

Mio won this as expected but it was much closer than what I would have thought. Yui put up a good fight against the former tiara holder and this just show Mio strength is ever decreasing. Perhaps the new movie will boost K-On!’s strength next year in not only ISML but also AST where they suffered a Round 1 All KO result this year.

This match proved that Haruhi is quite popular as ever. Even Diamond Necklace winner Eucliwood can’t knock her off despite a strong Regular season showing. This match also let us see that the veterans are still holding fort in ISML despite challenges from new comers. Congrats to Haruhi once again. 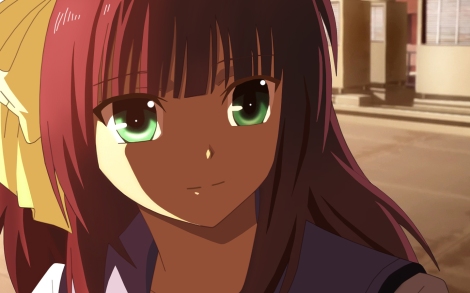 Only battle of the day between 2 newcomers. Charlotte lost as expected but I had hope she will be able to win. Looks like she was not able to replicate her regular season results over Yuri. Was fine with either one winning and Yuri once again ranked 13 just like her seeding position. Charlotte make it one rank higher then her seeding though. Congrats to both for doing well especially Charlotte and this may be the last time both will be in Top 16 so enjoy while it last!

Quite a surprise here as even though Hitagi has proven her wins over Nadeko over time I thought Ruri’s match today will bring swarms of HanaKana supporters to vote for the other 2 participating in their battles today. Nadeko did not even post over 6000 votes and hence become once again ranked 16 and fail to secure any win in post season like last year. This match is also essentially a re match of last year’s DE and Bakemonotagari finish up the last 2 spots of top 16 once again. Doubt we will see them again next year. Congrats to both anyway to secure top 16!

So next match on Tuesday night will see Ranks 2-12 being decided and obviously the Tiara holder of 2011. It’s been a whole year of Saimoe with ISML posting little upsets until postseason where Mikoto’s bracket saw Ruri performing better then expected and of course Kanade’s 49 win title but her dream was stop by the Flame Haze herself. Next match will see an epic clash of Fire VS Lightning and numbers will not matter anymore this time. This match will be an unpredictable match, expect close wins by either contestant. For me I am going to support Mikoto to the very end and will step up on online platforms to help gather more votes for Mikoto. Will post previews when ISML site update their featured matches and I hope you guys will continue supporting ISML till the very end. I also implore you to vote for Mikoto, our Biri Biri and Tokiwadai’s Electric Princess the Level 5 Railgun. Good Luck to both nonetheless and on 17th November we shall know who is the hard fought winner of 2011.