Onjouji Toki from Senriyama All Girls

Okay during the blogging hiatus since Aquamarine to Amethyst, I been busy with Diablo III and also this anime known as Saki Achiga-Hen or also known as Saki Episode of Side A. This anime chronicles the spin off from the main Saki manga where a group of girls from Achiga Girls wish to reunite with Nodoka in the Nationals. Well not all but the main character Shizu is the main driver of reuniting Achiga Girls’ Mahjong Team and her main motive is to meet Nodoka once again. (They were Middle School friends apparently)

So anyway I am already at Episode 11 where Miyanaga Teru, Saki’s sister is pretty much dominating the table which is plainly put getting boring since it freaking one sided. How is the other three players going to survive is way more interesting. For Achiga Hen the story is up till the Semi Finals where the four schools playing are:

So Teru is from Shiraitodai which has won the championship 2 times in a row and looking to win a record third. Teru is freaking strong so yea that’s pretty much sums up how strong is Shiraitodai. Even Senriyama which is ranked 2 behind them can’t do anything with their ace Onjouji Toki.

Which brings me to the actual point of the post laughs. The last few episodes have actually been centered much around Toki which is a sickly and frail typical anime girl you would expect from anime and stuff. However, in the last two episode she really skyrocket in my own Sakiverse characters ranking. Her cool power of “Seeing One Turn Ahead” is great especially the anime animated it very nicely too. However its her motivation and perseverance that brought my attention to her. She tries hard to counter Teru and even put her body to strain by looking Double and as of the anime Triple into the future to counter Teru. She very nearly fainted a few times yet she still tries to do so. Ryuuka (her best friend) cries for her to stop when she tries Triple (Anime Physics lol. Like the timing and when she shouts stop totally coincide nicely with the scene and music haha. But that’s why I love anime). I was actually worried for Toki after watching the anime even though I know from the manga she is still fine albeit very weak.

With this episode I really like Toki and Senriyama now. In some respect they are or at least Toki is more interesting then Shizu which to be honest is not a very strong main character and just the typical overly cheerful girl which is not appealing. Some people are actually saying just rename it Saki Senriyama Hen rather then Achiga. Laughs but well I personally do hope Senriyama make it to the finals, Achiga is too boring for a Finalist to face Kiyosumi and I would like to see how Toki handle Teru again with Yuki (Kiyosumi) and possibly Jindai from Eisui. (Or the unnamed character from Rinkai).

The ED Theme Futuristic Player really suits Toki as a theme song since Toki is really a futuristic player. It is also a good song to kick in the anime scenes just like how Saki did with 2 different themes too, a happy and a melancholic one.

I recommend Saki Achiga Hen to all those that enjoyed Saki. The first few episodes maybe less mahjong centric compared to Saki but it is definitely getting more interesting as the Semis drag on. I could only wish for Saki Season 2 now haha. 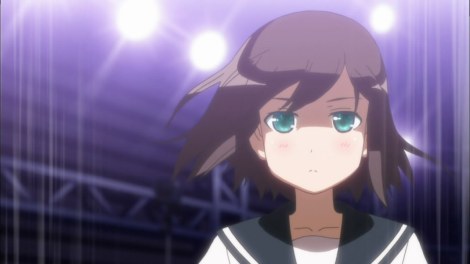 Another picture of Toki! I am hoping she will do well for Anime Saimoe Japan 2012 but well I do not think so. As for ISML… Saki characters have not done well at all for ISML so yup no chance there haha.