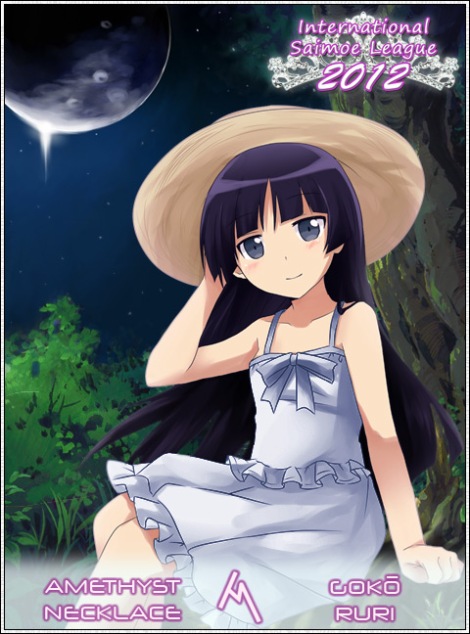 Nagato Yuki went into the necklace hoping to achieve history by defending her necklace once more but it was not to be with Kuroneko winning the necklace for the Nova Division again. Misaka Mikoto did not make it into the necklace match because she lost to Nagato Yuki during Amethyst 7 and it was heartbroken for me. That ended her winning streak plus any chance for Amethyst Necklace. By losing to Yuki I really doubt that she can win another necklace and it look like the Tiara’s fatigue is showing in her crucial matches. Hopefully her loss in Amethyst will either bring up more supporters that got complacent or it is hard fact she is losing strength. As much as I do not want to say I think she will not be able to win against Shana and Taiga if this goes on. On the other hand Taiga lost out the necklace by a razor thin 5 votes and that is going to hurt for Taiga fans. Eucliwood strength seems to have dipped but maybe its due to group matches hence why. Shana pulled in most votes but her low SDO prevented her to grab an untouched necklace for her. Ruby Period will be the next period and I am predicting Shana will defend her necklace especially seeing how she is doing well in Stella thus far. I only hope Mikoto will still end up top 3 for Stella for now.

PS: Sorry for the Mikoto rant but as my readers know I am an ardent fan of Misaka. On the other hand though Charlotte is doing very well thus far with only 2 losses and I am happy with that. As we enter the third period ISML is proceeding on fast and sooner or later Post Season will arrive. Wonder what kind of seeding we can see then.

By the way, lovely poster for Ruri. Loved it much.