Koromo make it through as expected without any much resistance from the KugiRie combo at all, leading the match right from the bat. Looks like Haitei > Fast east hands. Yuuki once again fell to yet another Saki in her quest for the title but impressive run considering she is an veteran in Saimoe and AST tend not to favor veterans except a select few. With this Koromo book her rematch with Saki (Not a Saimoe rematch per said) and I dare say Koromo will reach yet another QF berth once again, an impressive 3 QF berths out of 3 participation if she does that. Saki also secure Block A with that which was not entirely unpredictable anyway.

Toki easily secure her win over Iori who really had no chance to even challenge Toki even with the KugiRie mojo at work. Faction power wins Seiyuu combo this round again as expected. iM@S nowonly have Chihaya left in the tourny and I dare say she may just have it to reach the Block Finals. That is for another time though as today Toki posted yet another impressive vote total to face Akari next. This would be an epic match to watch and I personally think whoever wins their bout should be the one winning this year’s title. We shall see~

Round 3 Prediction Record 3-1 (I predicted Saki will lose to Kobato, turns out to be otherwise)

BLOCK C AND D ROUND THREE DAY ONE PREVIEWS

Saki for the third day running and KugiRie strife coming up!

Hisa finally reaches Round 3 after waiting for 2 years and like the anime she may finally reach the Finals she always wanted. Not only that Kuuko was the one that knocked out Shizu (whom spectacularly won TOSHINO KYOUKO) with a margin of 2 votes. Faction power may prevail this time enabling Hisa to reach Block Finals for once but Kuuko should be taking this one from her. Anti Saki faction coinciding with an expected huge turnout for the other match should stop the Saki train for this block. Besides Nyaruko herself had beaten Hisa in prelims so Kuuko should be able to do so. 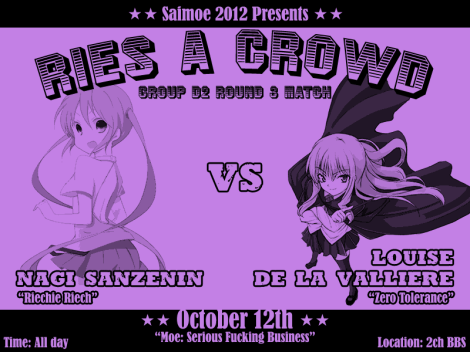 An inter KugiRie faction war where one has to go for another to proceed. I am not KugiRie fan so either one that proceed does not matter to me. If i have to choose I would prefer Nagi since compared to Louise at least she is not a total b****h. Louise may take this though since like Shana it’s her last chance most probably in AST. Leaning towards Nagi as Nagi s definitely ranked higher in the hRIEachy compared to Louise.

Predictable match ups so far but today’s Hisa-Kuuko may prove tricky. Another Saki win will be great for me but seeing how Saki has been on a roll, this is the time for Anti Sakis to punch through as much non Sakis as possible to the QF. Nagi should be able to grab yet another win to reach block finals again.