Tachibana Kanade from Angel Beats!   VS   Goko Ruri (Kuroneko) from Ore No Imoto

Kanade took this easily even over Ruri whose own 1 vote coup over Eucliwood is also monumental in her own right. Kanade maintains her perfect score thus far and rolls on to the Tiara play off with no sign of letting up. She is seriously going to be the one to stop this year. Last year she was stopped by Shana but this year due to the brackets she is not meeting her unless its the finals. Without Shana I would think none of the other girls could stand up to her with the exception of Taiga and Mikoto and indeed Kanade is the overwhelming favorite to win it all this year round. Congrats to her win for Sapphire as she adds another gem to her trove and I believe loads more are coming up soon.

Misaka Mikoto from To Aru Majutsu No Index   VS   Aisaka Taiga from ToraDora! 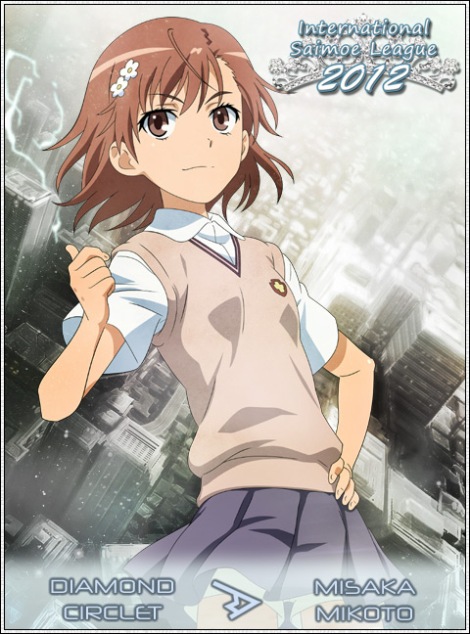 As many of you know I am a fan of Mikoto so her win made me very happy even as I doubt she will have an easy time against Taiga. However those were quite unfounded as she swept aside Taiga with even more votes then their last encounter back in Emerald 7. This win add Diamond to her Aquamarine and Ruby plus of course the Tiara. Hope to see more posters of Mikoto in the near future, I wouldn’t mind another Tiara poster of her! (2012). That being said Mikoto has held on strongly since her shock loss to Yuki back in Amethyst 7 and she rebounded strongly to overcome the top two Rie back then and also grab Ruby as she does so. She is #1 seed again and by comparing stats with Nova I dare say she is either #2 or #3 overall. This proves that her Tiara win did not impede her chances to be in the top tier once forth and making a repeat champion likely. That being said Kanade stands in front of her and not to mention possible snipes from defeated characters in the Grand Finale Post Season. I hoping she will go as far as possible reaching the Finals for a record third time to prove that winning a Tiara DOES not weaken you definitely as seen from Fate,Mio and Hinagiku.

ISML 2012 continues on 14th October with the Divison Finals Round 1 winners participating in it. I am rooting for Mikoto once again but who shall be the one you root for? Prepare yourself as a year long Saimoe campaign comes to a close soon. Very soon!

PS: One could follow the AST 2012 information for now to sate their Saimoe thirst. AST may have lower vote numbers but it is definitely and interesting Saimoe tourny to watch. After all its the mother of all Saimoe.